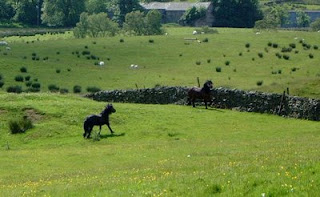 Jen (our daughter) arrived this lunchtime, with Rob (her partner) and Naomi (our grand-daughter). We shut the gates, hung the CAUTION - LESSON IN PROGRESS sign, and brought both ponies out and tied them in the sunshine while we fitted harness to Sonny. Lots of fiddling, all very good for him. He stood well and even when we decided to trim the matted bit off his ear he didn't make much of a fuss. Jen cupped one hand round his eye like a blinker while I nipped off the "felt". He tries to lean on you to stop things he finds annoying, but he doesn't thrash about or kick or rear, so gentle persistence is working. He actually rather enjoys having his ears scratched, once he's let you get your hand up there; the eyes go all sleepy and he leans on your fingers. We picked up all his feet again too. He wasn't actively naughty, just a bit stubbornly unco-operative. His feet do need a trim so if Danny isn't coming soon I might get the rasp out and have a go at them where the excess growth is cracking. Mind you, steady work on the roads should sort them out. Interesting how the pony's movement is shown up by the places where wear and overgrowth occur in the hooves.

We fitted all the harness and brought out the carriage. Graham was doing some maintenance on David's exercise cart, so instead we showed Sonny the cross country cart with its big wheels. This involved letting him come up and sniff them, then Jen led him round to the other side (horses' brains need to accept input from the left eye AND the right eye). I walked round the yard like a daftie pulling the cart while Jen led Sonny after it, circling in both directions, so he could see how the wheels behaved. Much interest, but no panics. Good. Rob and Naomi sat on the barn steps and made remarks about Grannie having got the sequence wrong because the pony was following the cart. Ha ha.

We fitted the carriage to Sonny after that. He accepted pretty well everything, which is as it should be, after nearly 3 weeks of trotting round Tebay with David and the ex cart. He was a bit puzzled about the shafts bumping more freely in the tugs (David's cart is a nip fit, rather like a pair of nutcrackers!) but accepted it. More adjustments to the harness followed. More scratching of his ears and picking up of feet. All good stuff. Lots of praise.

Then it was "take it all off time", and Jen saddled up and introduced Sonny to the mounting block (highly portable home made thing) which we'd plonked in the middle of the yard. We edged him up to the block and she leaned across him then mounted. He was okay with all this as he'd been ridden before, and I left her to walk him around the top of the yard while I harnessed Ruby and put her into the carriage ready to go. Opened the gates, walked Ruby up to top yard and let Sonny see the whole thing, before setting off for a quiet walk up to the top of Whiteholm.

Both ponies walked out well and Jen gently convinced Sonny not to try being silly. He tried one shy, and didn't bother again. While we were talking Jen said he had been unusually reactive when she introduced herself in the stable. He had known she was there, but when she touched his shoulder he "turned himself inside out". So the quiet stance and the gently sleepy eyes are not entirely to be relied on. Sudden explosions like that make you wonder if someone has at some time been very rough with a pony.

We walked all the way up to the top of the common with Ruby leading Sonny, or Sonny alongside the carriage to watch the wheels, which he didn't mind at all. He also obeyed when Jen stopped him well short of the cattle grid while I took Ruby on and turned her. She then asked him to lead the way home; classic early mounted work. Put the experienced pony in front on the way out, and the youngster in front on the way back. He walked well and Jen collected him and asked for trot as they went up Daw Bank. Which he did nicely on a pretty well loose rein.

By now we'd been working with or around him for over 2 hours, which would have been too much for a young horse, but as he's 8, equivalent to a fairly mature teenager, it didn't seem to overface him. We gave him a carrot, and Naomi helped give Ruby a handful of feed, then we turned both Mum and son out in the field for half an hour to finish their socialising and have a nibble of grass. Jen didn't let him drag her about on the way to the field - he had to walk away and back several times and behave properly before she would let him through the gate. 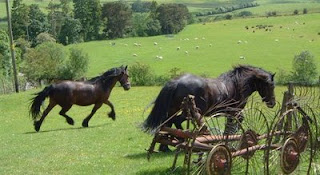 Ruby demonstrated her athletic stride for us with huge gusto and Sonny bounded along after her. She's already put him in his place once or twice, the initial delight at seeing him having faded into parental responsibility!

Jen and Rob and Naomi went out to bring them back in, after we had all had a drink and done some jigsaws indoors. Ruby kept looking back - she appeared to be worried that Naomi was with Jen and Sonny, instead of herself. She is so maternal. Sonny followed her into the stable without argument - an improvement on 9 am this morning.

All in all, a good afternoon's work. Tomorrow, I'll drive him.
Posted by Sue Millard at 5:05 PM