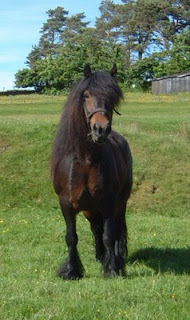 Not so good today, at least to begin with. I think it's probably the grass yesterday - as on Sunday they only had less than an hour out, whereas yesterday it was nearer 5.

I put Sammy the sheepdog on a short rope in a different place for Sonny to look at and not have the excuse of "oh he startled me". I brought Sonny out just after 10 am, after he'd had his morning haynet (which he isn't mad keen on). I tied him to the "patience tree" and groomed him, and harnessed him up. He was okay. Then I brought out the cross country cart, which he'd seen on Sunday, and let him look at it, then I brought it up and put the shafts round him. Scuttle, fidget, quiver, "oh my, that's dangerous." So I let him settle, and took it away briefly and put it on again. More fidgeting. I fastened him in and let him stand.

He did a lot of wandering from one side to another, so I set him up with the wagon line again in case he got really stroppy. I'd put on coat, hat and gloves to go out driving, but I discarded the idea, and shut the yard gates. I sat with him for an hour while he fiddled and faffed about. Every now and again I went and walked round him and shoved the trap shafts about, bumping them up and down and side to side, and pulling and pushing the trap back and forth. He fidgeted a bit each time, but less, until eventually he didn't really bother. He spent some time rubbing his head on the halter ropes and trying to get his head under them to bust them. It didn't work, mainly because the tie level is higher than his withers and he can't get any purchase on the rope by snagging it over his poll. He's obviously done this a few times and been able to escape.

When he had stood quiet for a while I took off the cross country gig and put the exercise cart back on him, which he didn't fuss about nearly as much. He's now standing for another hour, with a haynet (and refusing to eat the hay). I think the photo for this one needs a caption of Harry Enfield's teenage monster saying "It's NOT FAIR."

It doesn't matter which cart he accepts, since he isn't going to be a driving pony. What matters is that he stops buggering about when he doesn't think he wants to do something.

LATER
Having let Sonny stand for another hour, (like a pot of tea stewing) I went out and put on my hat and gloves and prepared to drive him round the yard. Jen's driving pupil Mike turned up and seeing the CAUTION sign on the gate he parked the horsebox outside and walked in to see what was going on. He introduced himself to Sonny, who'd calmed down by then into boredom, and I asked him to unclip the rope while I drove Sonny round the yard. After his three hours of standing, Sonny went willingly and only tried to second guess the turns once.

Then Jen arrived, ready to teach, and as this little 5 minute trip round the yard was a big improvement on Sonny's earlier attitude, I took the cart off and unharnessed him. Jen saddled him and we put him into the stable to stand with another haynet while she taught her lesson to Mike and his pony Dennis; and I took Ruby out for a drive. His whinnies for his mother were pathetic but we hardened our hearts :) - even Ruby by then had got fed up with him and didn't bother to respond to his shouts.

An hour later again, after Mike and Dennis had done their thing, Jen brought Sonny out, checked the girth, showed him the mounting block once more, and rode him into Greenholme and up the hill onto Whiteholm, and back. She made him walk and stand, walk and stand. He tried shying once to each side and then gave over. She chatted to Willy Kipling in the village ("That's not your Mother's horse." "No, it's out of Mother's horse." "Ah. It's nice though. And is it naughty?" Hmm ....) Sonny fidgeted about but Jen didn't let him eat grass (which was what he wanted) or move on till she told him. They had some discussions about standing still on the way home, but she came back happy with him. She led him back to the stable and he was really listening to her - when she stopped, he stopped, and when she walked on, he walked on, on a loose rope. This is the result we are looking for. So although it was a long day, by 3:15 pm there was a definite improvement to be seen. 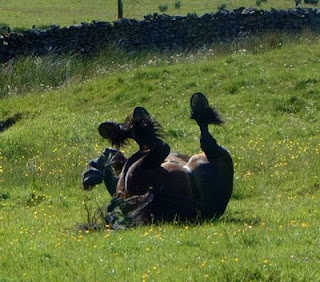 I turned him out with Ruby while I tidied the stables for the night, and he had a good roll: "wash that cart right outta my hair!" I brought them both back in after half an hour. Ruby was busy scratching on a low tree branch and made me walk all the way down the field for her, but Sonny came cantering after his mum in case he was going to miss something. While I took Ruby indoors he had a good long drink, and then let me clip on his lead rope and lead him in. Walk with me, stop with me; walk with me, stop with me. He's improving.
Posted by Sue Millard at 12:14 PM