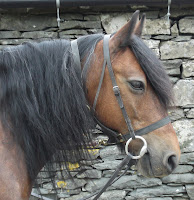 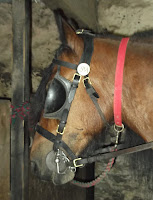 Posted by Sue Millard at 1:56 PM No comments:

Writer's block - or what? 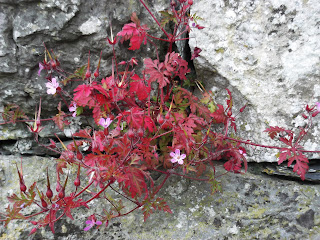 I'm anticipating a busy weekend. The Orton Scribblers meet here on Monday evening; I have to attend a Fell Pony Society meeting on Tuesday; my daughter, grandson and I are going to Cheshire to visit my mother on Sunday, and tomorrow I shall be in Keswick talking to the Cumbrian Literary Guild about "Researching and Writing a Historical Novel".

I hope you appreciated the jumbled chronology there.

It's symptomatic of my writing approach at present. Although I have some fairly good ideas in my head, and one of them tapped me on the skull yesterday and suggested that it could rejuvenate an MS I have rewritten without satisfaction over the last few years, I seem to be putting off writing. I've even got to the stage of ratching out old blogs and articles to print off as my reading contribution for the Scribblers. And we only meet once a month.

This is serious inertia.

One excuse is that the car, which I need, to get me to two of the impending appointments (and to stock up on staples like bread, milk, and cream crackers), is currently at Tebay in the garage. It's having its electric boot lock "looked at" because it won't open; according to various web forums, the internals of Vauxhall boot design on this model are shite. Bits have been ordered for it, and they have arrived but they have also been pronounced Wrong. So Chris the garage man is returning the car to me "this afternoon" - which will probably mean 6-15 pm, but might be earlier... or not.

Another is the impending arrival of printed copies of my poetry pamphlet "Ash Tree", due out next month from Prole Books. It's highly personal stuff and the idea of doing readings from it is pushing me to find alternatives that are linked, but not so emotionally charged.

I've written a lot in the past week on horsey web-sites.

I've researched and produced an article about bits (The Single Jointed Snaffle).

I've read more than I probably should have done about academic research into the DNA sequences of the horse and and how to read genetic diagrams. But I am still twiddling my thumbs today about whether to start doing anything worthwhile like Exercising the Mare or Doing Some Writing.

Maybe it's just the warm weather.

And maybe I am just making excuses.

PS - the car has just been returned. Grocery shopping will now occur at great speed.

I suppose that answers the question. See you all later.
Posted by Sue Millard at 5:01 PM 2 comments:

The Twisted Stair is free to download for Kindle, until Friday this week.

The dark side of human emotions may not always lead to murder...

Getting My Eye Back In

I've spent the past week mostly writing specialised non fiction about horsey subjects. Single jointed snaffle bits, to be precise; not really on topic here, but if you are interested in an equestrian rant, try The Single Jointed Snaffle, and the effect of rein angles, auxiliary reins and nosebands. Yes, I did say it was specialised.

Between driving my Fell mare Ruby, and visiting the Old Git pony Mr T down at Millom, and attending the monthly harpers' workshop, and watching a game or two of Wimbledonnis, I've struggled to get any Proper Writing done. God, it's a hard life.

I've also been trying to get my eye back in for poetry, ready for Prole Books' launch of my poetry pamphlet, "Ash Tree", next month. I admit I'm being a bit lazy about this, so I've been teasing myself by writing little poems - probably the smallest there are, the Japanese Haiku. Haiku are primarily nature poems, and Cumbria is looking/sounding/smelling/feeling terrific just now. For now I'm simply lumping them under the title of Cumbrian Haiku, but if something better pops up I'll use it!

Here are a few haiku to be going on with.

I also have to polish my talk for next Saturday at Keswick, to the Cumbrian Literary Group: "Writing a Historical Novel." I hope it will go OK!
Posted by Sue Millard at 8:29 PM No comments: