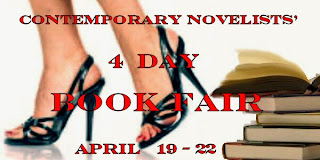 "This is a Book Fair for authors and readers who love contemporary romances, chick-lit, romantic suspense novels, family sagas or lovely tales of village/town life with a touch of romance."


Now then, writer person. It's a middlin' sort of day. Are ye well?

Ah'm a bit flustered-like, thinkin' ye might expect me t'be wearin' spike heels like them in't photograph. Well, ye'll never catch a sheep in a dippin' pen if yer teeterin' about on stilts like them. Ruin yer feet too. Be warned, Ah'm built for comfort an' so are me shoes.

Well, Ah dun't know whether yon book of thine would count as "lovely village life" but Ah've got family all reet and since ye've writ about 'em people can read about 'em if ye like. Now Ah've got taties to scrub, so if ye'll excuse me.... 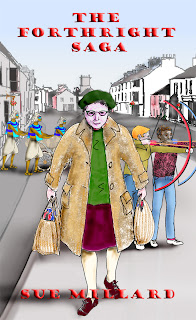 Extract  from "The Forthright Saga"

A dark-haired fat boy and a thin ginger one crouched in the bottom of a beech hedge beside the garden wall of The Grange. It made a good base camp for war games outside in the lane, and for pirate raids into the garden itself.
“C’mon, Wayne,” wheedled the fat boy. “That Mrs Station leaves the kitchen door open. When she goes out to nag the gardener, we could nip in, easy.”
“Aw, Zak! She’d come in an’ catch us.”
“No she wouldn’t,” Zak said scornfully. “She’s one of them twig women. She’d scream and run for help.”
“Yeah, and she’d fetch him, that gardener.”
Last summer, Captain Zak had urged various Pirate Crews over that wall in raids for raspberries, peas and ripening apples. The Crews had all been young, skinny and quick, and Ernie, who had been the gardener there for many years, was none of those things. Unfortunately when Ernie retired the situation changed. The new gardener was also skinny and quick and he worked far more hours than Zak thought was fair. The garden was dug and manured, the plants sprouted in pots and under cloches, the fruit trees were neatly pruned and the raspberry canes had been cleared of everything but their last summer’s growth. Zak hugged his denimed knees among the slender buds of the hedge, and resigned himself to the fact that it wasn’t yet worth sending his new Crew plundering.
His previous Pirate Crews had long since mutinied to play elsewhere, and the choice of accomplices was becoming limited. He’d picked Wayne mainly because he was a new boy to the school. Being ginger-haired Wayne was easy to ridicule, and he was skinny and quick all right, but he wasn’t anywhere near as biddable as he should have been.
“Dun’t be such a mardy-arse,” said Zak. “It wouldn’t hurt to have a look indoors. They’re rich, ain’t they? Look at that fancy lamp thing they put up. Dad says it must’ve cost a fortune.” The copper and etched-glass lantern over the front door had been a talking point for a week. “There might be summat. Big cars, locked gates, stands to reason they’ll have things we can nick.”
Wayne wriggled. His Dad was Nora Forthright’s son, Dangleby born and bred, so in the back of his mind, he could hear the tones that his Grannie Nora would use if she found out he’d been stealing. Not the words; he could never predict what she would actually say. While it seemed scrumping had been all right in her own childhood, she’d tut-tutted and frowned theatrically behind those silly old-fashioned glasses when he tried to top her stories with Zak’s Pirate invasions at The Grange. As for stealing, real stealing from inside somebody’s house – oh no, he knew the shrill voice she’d use and his Dad’s hard hand that would follow, and he wasn’t keen on risking either of them.
“That gardener can run faster’n me, so he’d catch you no trouble. And there’s cameras.”
“Them things don’t work,” said Zak, ignoring the slur on his running speed. “Me dad says they’re just dummies. We could nip in after school. I bet they don’t turn ’em on until it goes dark anyway.”
Wayne frowned over this; something didn’t quite make sense.
“Grannie Nora thinks they’re real,” he said. “I’d rather play Spiderman.”
Spiderman was a simple game to see who could climb highest in the local trees. It was one of the few challenges where Wayne’s slighter frame was likely to overcome Zak’s bulk, so Zak ignored the suggestion.
“We should come at a weekend. We’d have plenty of time then.”
Wayne sighed and abandoned Spiderman. “I’m not missin’ footie practice on Sat’dy.”
“Sunday then,” said Zak, knowing that Wayne had never yet been chosen to play for the team.
“I got jobs to do for Grannie Nora on Sunday. And the gardener might be here.”
“He won’t be workin’ Sunday,” said Zak scornfully. “Just cos your Dad works Sundays, don’t mean wussy Alan does.”
“Well what about Mr Station? I bet he’s home at a weekend. I’m not gettin’ anywhere near him – not with a name like Slogger.”
“That’s only cos he plays cricket. You wouldn’t know him. You weren’t here last summer.”
“Wi’ that big black car, I bet he’s a drug dealer,” said Wayne, his voice rising in desperation. “That’s why he’s got all them cameras. I bet that gardener’s a drug dealer too.”
“Him? He’s not a drug dealer, he wouldn’t need to do gardening if he was. He’s that skinny I bet he sniffs coke. Bet Slogger Station pays him in coke an’ that’s why he’s always so wired.”
This worldly wisdom fascinated and confused Wayne so much that curiosity overcame his fears. “You don’t smell coke, dummy, you drink it. Or else it’s that black stuff Grannie Nora puts in the stove to burn.”
“You sniff it up your nose,” said Zak.
“You do not.”
“Do. Darren’s big sister Jade says.”
Wayne thought about it for a moment. “That’s weird. You’d drown.”
“It’s not a drink, dummy. It’s like a powder. Darren says it tastes funny. Jade told him she’d lock hers up if he tried it again.”
“Does it taste like Space Dust?”
“Yeah,” said Zak with certainty. “I suppose it fizzes more if you put it up your nose.” After a moment he said, “I got 50p, let’s ga down the Post Office and get some.”


Visit other fascinating blogs by contemporary novelists at the Book Fair.

Thanks for taking part, Sue.

LOL. This is great and so comical. Just William on steroids! Loved the coke episode. Hope this does well for you. ;)

Thanks, Francine! I know this may be somewhat too British to travel across the Pond, but it's doing all right on this side :)

Quirky and funny. Good luck with it, Sue.

I could see and hear these two! Wonderful excerpt, especially the conversation about the coke. Best of luck with it, Sue.

LOL. Thanks for sharing this, Sue.

Sue, a perfect english, Just William story. I could see those two boys working it all out, little rascals! Wonderful and I hope you sell millions. Good luck.

Sorry I'm late to comment, but I love the dialect! The title is fun, too. Best wishes.