The Roast Beef of Old England... 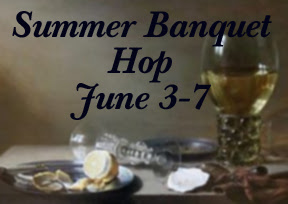 On that late summer day 30 years ago, we moved from Shap in Cumbria to our present small farm in Greenholme. We had stretched ourselves a long way financially to buy it. However it was only 8 miles from one house to the other so as husband was a self-employed haulage contractor we used our own wagon to complete the move, instead of paying a removals firm.

Having spent the previous six weeks shifting small items by car and caravanette into one of the farm buildings, we were now dealing with serious things like beds and wardrobes and curtains, oh yes and children. A Shap neighbour, Ivan Day from Wreay Farm, volunteered to give us a hand with the lifting. I'd kept a borrowed Fell pony on his two acre field (she had the magnificent name of Heltondale Matty Benn of Biglands). Our kids played together, and we knew Ivan mostly as a plant collector and gardener.

Today Ivan is an independent social historian of food culture and also a professional chef and confectioner, lecturing abroad, teaching cookery and all aspects of British and Italian food history at his home in the English Lake District. He is also the author of a number of books and many papers on the history of food and has curated many major exhibitions on food history in the UK, US and Europe. His blog is Food History Jottings. Here's a nod of thanks to him for his friendship.

My favourite summer sandwich is underdone roast beef in salty-buttered brown bread, with horseradish sauce. Accompanied by a shady tree and busy birds and a nice view...

Here I look at one of Ivan's collected recipes for that roast beef, as defined by Robert May in "The Accomplisht Cook" published in London in 1660, the year of Charles II's restoration to the throne. I've put this recipe side by side with Mrs Isabella Beeton's French version 200 years later, in 1861. I've pulled out and listed the ingredients so that the 1660 presentation of the recipe is similar to that of the later one.

To Roast a fillet of beef

A Fillet of beef
parsley,
a few sweet herbs chopp'd smal,
the yolks of three or four eggs,
gross pepper minced amongst them
the peel of an orange
a little onion
a little butter,
vinegar,
gravy,
a spoonful of strong broth

Take a fillet which is the tenderest part of the beef, and lieth in the inner part of the surloyn, cut it as big as you can, broach it on a broach not too big, and be careful not to broach it through the best of the meat, roast it leisurely, & baste it with sweet butter, set a dish to save the gravy while it roasts, then prepare sauce for it of good store of parsley, with a few sweet herbs chopp'd smal, the yolks of three or four eggs, sometimes gross pepper minced amongst them with the peel of an orange, and a little onion; boil these together, and put in a little butter, vinegar, gravy, a spoonful of strong broth, and put it to the beef.

4lb of fillet of beef,
1/3 of a pint of beef gravy,
demi-glace sauce,
horseradish sauce.

Tie the meat in a good shape, place it on a dish, pour over the marinade and let it remain in it for 3 hours, turning and basting frequently. Have ready a sheet of stout, well-greased paper, drain away ½ the liquid part of the marinade, fold the remainder and the meat in the paper, and fasten the ends securely. Roast or bake for 1 ½ hours, basting frequently with butter or dripping; ½ an hour before serving removed the paper and when the meat is nicely browned brush it over with meat-glaze and place it on a hot dish. The demi-glace sauce may be poured round the dish or served separately, the horseradish sauce being served in a sauce-boat.


The main differences in the cooking methods are that the 1660 version expects the meat to be spit-roasted in front of an open fire with the juices collected in a dripping-pan, while the 1861 version expects it to be wrapped and baked in a dish in the oven. May uses butter where the later recipe uses oil. Although the 1861 recipe doesn't say what temperature the oven should be, Beeton's massive work says, "Meat is done when it has been heated throughout only to the temperature of coagulating albumin, provided the heat is continued long enough; it is thoroughly done when it has been heated through its whole mass to the temperature at which the colouring matter of the blood coagulates; it is overdone when the heat has been continued long enough to harden the fibres." May's "roast it leisurely" is a delightfully confident alternative.

Make up your mind: the three books on offer can be seen on my web site at http://www.jackdawebooks.co.uk/

Each author in the Hop is hosting a giveaway on their site. Do visit and see what's on offer alongside the interesting and informative blogging!

I love roast beef sandwiches. Enjoyed the choices you offered. Thanks for the giveaway opportunity.

I have learned to incorporate a bit of protein in each of my meals of late. With a no sugar diet, I am subsisting on fruit, vegetables, and a bit of meat. There are no potatoes, dairy, or carbs. However, before that time, I was a vegetarian.
I enjoyed the recipes.

Interesting to compare these two methods of roasting beef. My vegetarian husband (who's English, too!) wouldn't be interested, but despite my efforts to follow his example, both recipes sound good to me.

I wanted to say that these recipes read like poetry.

And now I can! Thank you!

Delicious! I am a meat eater, so these recipes sound really good!

Surloyn? Sometimes when I read older English, I wonder if it was a lack of education or if that is how the words were spelled. Maybe some of each.

I go with May's - 'roast leisurely' but Mrs B's oven method when i'm roasting beef. I put a little moisture (about 2 tablespoons worth) around the beef - with sliced onion, stalks of celery and some worcester sauce and slow roast it for c 4 hours! It is so tender after that that it needs to be left overnight before it can be sliced, otherwise it falls apart. If doing pork I substitute an orange and an apple for the onion and celery. Afraid I can't cope with rare beef - so serious foodies won't want to come to my house, but it is beautiful, I promise...

Robert May's version seems to have an early hollandaise sauce to accompany the beef. How interesting!Thanks, for the giveaway! denannduvall@gmail.com

Re the "surloyn" spelling, remember that English hadn't yet been standardised in dictionaries in 1660. People wrote things the way they had been taught and often the way words sounded - "sur" being French for "above" and "loyn" being how the word "loin" was (and is) pronounced - and this is where the fillet comes from on the animal.