Monday 29th June
Jen and I took both ponies for a quiet ride out to Scout Green, with Naomi as my passenger on the carriage. The weather was heavy and the clegs were biting, so we just wandered peacefully up to the top of Whiteholm and across the bit of open fell onto the Scout Green road, and back. Sonny was quiet and steady apart from a startle when he brushed Jen's leg against one of the flimsy "loose chippings - max 20mph" signs on the roadside, so she spent a few minutes walking him up to other signs and kicking them with her boot! Of course he just stood there and said, "whatever..." We also practised leapfrogging each other along the road; Jen would walk or trot Sonny past Ruby, then I'd do the same with Ruby passing Sonny. Both ponies were calm, to the extent that I could brush clegs off Ruby from all sorts of places with the tip of the driving whip. The only time she startled was when Jen clapped her hand over a cleg on Sonny's neck with a tremendous crack! like that of the whip a few days ago. Other than that, it was all quiet.

We washed off the ponies and then put fly rugs on them. I didn't have my camera out but the picture they both made was hysterical - Ruby in white mesh with ear caps and navy edges, Sonny all in lilac with red leg straps. They didn't fuss about their strange attire until they were loose in the paddock, when Sonny took one look at Ruby and exclaimed, "Oh my God it's a ghost!" and Ruby dashed off saying, "Where, where!" The two of them then hightailed it round the paddock, stepping and snorting at each other and generally being silly for a good five minutes before the lure of the grass settled them down. We gave them an hour and then put them back indoors with their haynets.

My bedtime "haynet check" revealed another side of Sonny - when I hung the haynet for him, Ruby came to help him taste it over the partition, and he snapped first at her and then at me. Unfortunately for him, I'd seen him coming so I put up a fist as he swung his head, and he smacked his cheek teeth on it and rebounded with a "What the hell was that for" expression. Unlike the brightest horse we've had he didn't then repeat the misdemeanour to see if he'd connected his action with the self-inflicted punishment.

Tuesday 30th June
Alison arrived prompt at 9.30 and we tacked-up Sonny with his nice clean saddle and bridle. 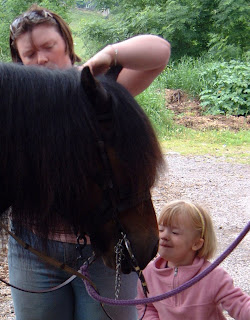 Naomi helped by kissing him on the nose at every opportunity.

Alison mounted to practise handling the lead rope as well as the reins, and ground tying. We let her take a stick with her, one that some boy visitors had collected a few weeks ago - on the principle that if she carried a stick she wouldn't need it and if she didn't - she would!

She walked him up and down the yard, and then set off for home, with her husband John following in the car. 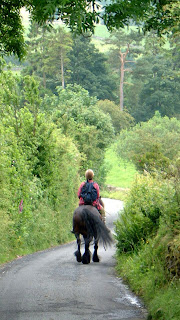 And we set-to to clean out his stable...

Just heard from Alison that she and Sonny had a good time on their ~10 mile ride home; both getting very wet in the heavy showers, but it was nice warm rain! and he's going to get daily rides out from now on. Great.
Posted by Sue Millard at 11:30 AM