Fell ponies on the Fells

The farm trailer clangs and rattles behind the quad bike as it growls up the fellside, and we ride its movement with our knees bent, like skiers. 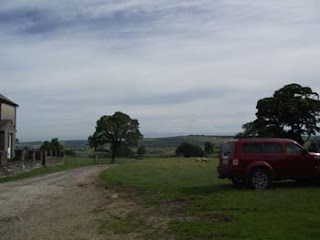 The late Chris Thompson’s hill farm, Drybarrows, is farmed by his son David and daughter in law Gail. Drybarrows is a typical Cumbrian holding, with a long winding track up through the fields to the house and buildings. Whereas on a lowland farm it would be very odd to have the house at one side of the fenced land, up here it’s right where it needs to be, looking down over the ‘in-bye’ from a position tight against the fell wall. The farmstead lies central to all the work because once you’ve gone beyond the buildings and through the fell gate you’re out onto the open common with the sheep and the ponies.

It’s a fine morning in early August, with wisps of cloud and a breeze thinning the sunshine on the tops. There is grass and sedge underfoot with sheep trods winding across black turfy soil and granite boulders poking up where they were left by the last Ice Age. A silver-grey tarn lying in a hollow reflects a darting dragonfly. Pinpricks of purple show where the heather is just coming into bloom. On the lower ground a neighbour is mowing-off encroaching bracken, and up here, when our wheels crush the fronds overhanging our path, we’re assailed by the same sour green smell. 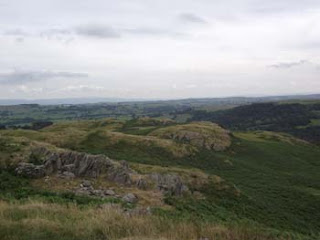 Hills and valleys unfold steeply, grey, fawn and green, and the higher we climb the more stupendous the views appear, fading paler and paler into distance, from sage and blue to an ethereal lavender. From the steep slopes above Haweswater we can see Cross Fell, the Pennines, and Wild Boar Fell above Mallerstang. If we were to climb still higher we could spot Blackpool Tower, the sands of the Solway and the hills of southern Scotland.

We are up here looking for Fell ponies. We’ve found and photographed most of them lower down the fell, but there are another six who have gone off as a separate band. David isn’t worried, however. The ponies travel widely, finding their own shelter in bad weather, seeking fresh grass.

“They move about a lot,” says Gail. “You’ll see them in one place one day and the next they’ve moved on. They seem to have half a dozen favourite areas to graze and as the grass freshens up they visit them all in turn.” 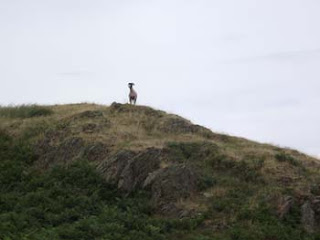 We don’t see anything remotely like a pony, however, only a variety of bracken, sedge, grass, rock and heather, and one or two sheep.

Instead we go back down to the farm and sit chatting over tea and biscuits.

Chris Thompson had come over to my house for an interview while I was preparing “Hoofprints in Eden” in 2004. Here he is, explaining how his family began keeping Fell ponies:

“My father had them all his life; and his father before him. I think they started, there was a farm sale at Town End at Helton, Mr Hunter, and that would be very early on before the First World War. Before the Society was founded. He bought 3 ponies there and he farmed at Scales where Dougie Braithwaite is now, you see. And he just left them on their own ground where they’d been taken from and that’s where they originated from.

“My father gave me one when I left Askhamgate and went to Drybarrows. I only had the one from home and I bought one or two from Sarge [Noble], which were local ponies round about Drybarrows; and I bought a one off Alan Kirkpatrick. His ponies were in the Society but it was his daughter who had them. He had them at Hullock Howe. And I also bought a one – the breed would originate from Sarge – off Anthony Barker at Patterdale; he was huntsman, once over. 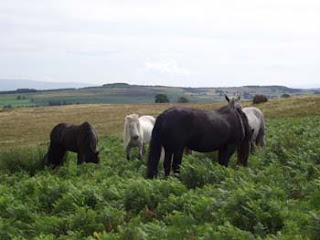 “There’s quite a range of Fell ponies and I always think there are two types; there’s a Fell pony, and a field pony! Fell pony will ‘do’ on the fell, whereas if I bought one that had never been on the fell – they haven’t the same instinct when they get to the fell, haven’t the field ponies. I know I sold  a Fell pony mare and she was in foal and I took the yearling back off her; the man said would I take the foal and I said, “Yes I will do,” and it wasn’t turned out until it was a yearling. And about Easter Sunday, some people who’d been walking on the fell came and said there was this pony;  and there just was the head there when we got there. It had gone to where there was some nice green grass round the bog and it had gone too far and couldn’t get out. We were lucky; it could have been buried and we’d have known nowt about it.

“They’re really knowledgeable. They wouldn’t take you into a soft place if you were riding a one. I have been out on the fell on a pony and the mist’s come in, and I haven’t had a clue which way I wanted to be. So I give it its head and it’s landed up at home. (But I’ve never had t’experience of riding another horse at fell to find it out whether it could take us home! Not when there’s been any mist!) I think I more or less gave it its head and let it find its own way. We might have gone quite a long way round by but I just couldn’t say that; it was mist down to home. I thought well, it’s a better knowledge of the fell than I have!

“They were quite good weather merchants. They knew when it was going to change and they came to the lower ground. I won’t say they come right home but you would see them heading down the fell and probably the next morning we’d three or four inches of snow. It’s instinct again isn’t it; but your older ponies quite often came and you’d probably got to go and look for the younger ones. Maybe if they’d missed the older ones coming away, they were to bring down.”

“I think you’ll go a long way before you’ll find anything that’s as hard and as tough and versatile as a Fell pony.”

Sue Millard's other books almost all have an equestrian background and can be found on her web site, http://www.jackdawebooks.co.uk

Her poetry pamphlet "Ash Tree" is published this month by Prole Books.
Posted by Sue Millard at 6:33 PM 3 comments: 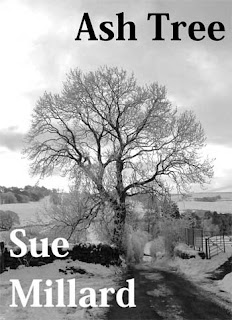 "Missing", one of the poems from my pamphlet "Ash Tree", is expected to feature as part of Eden Arts' "Lost Tree" project at Brough Castle, Cumbria in August/September 2013.

I plan to remember my grand-daughter by visiting this installation on the afternoon of 31st August, which would have been her 8th birthday. I will have copies of "Ash Tree" with me. I would be very happy to see you there - though I suspect there won't be many from this group who will be able to!

However, I am very grateful to fellow poet and novelist, Janni Howker, who read many of these poems with me for a poetry project last year (2012) and I thank her for giving me permission to use two of the audio files on my web site, http://www.jackdawebooks.co.uk/ashtree.htm so you can at least hear a couple of them.

The pamphlet/paperback will be available from Prole Books, http://www.prolebooks.co.uk/ from the middle of next week (9 August 2013). It will cost £5 plus postage. (We may do a digital version later.)