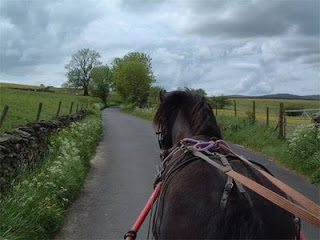 9 June
David's done the groundwork and it's just a case of spending a week or two filling in a bit more experience. Sonny is coming here early Sunday morning and David is going to give me a hand to introduce him to my cart with its bigger and more visible wheels. Then I will give David a lift home. I might drive Sonny out later in the day when he's had time to cool off after coming over Pikey [big hill to the south], but before he's thought about getting fresh again. Stabling him with straight hay-and-water and no hard feed has done wonders for his figure and also his attitude :) Like his Mum, he slonks a bit at walk unless you nag him. He still peeps at things, but that's just greenness, nothing nasty. Time and miles are the cure for that. Danny is booked to come and shoe Ruby and I've left a message that I want him to handle Sonny if he comes while Sonny is here. And yes, I know they have had their differences, but I have a strategy ready :)
Posted by Sue Millard at 12:00 PM