I took my Fell mare Ruby out for a drive this afternoon. The weather was just too good to waste!

She's had her hooves trimmed by the blacksmith in the past few days, so I fit her road boots - Easyboot Epics on the front and Easyboot Gloves on the back - to prevent her getting sore. I was planning to do 6 miles, going round Orton and back. Said boots all go on very easily (which should really have been a warning to me). Harness up, yoke up, and away we go. 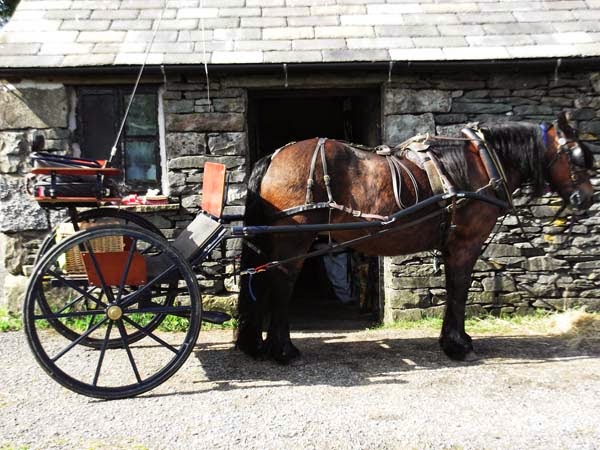 The outward leg of the journey is lovely. Just enough wind to keep us cool, lots of sunshine, and spectacular huge spikes of bright purple Northern Marsh Orchids coming into bloom in damp spots along the roadsides. Ruby settles into the work and goes past the event horses at Selsmire without any spookiness. Her bugbear, the extremely-white grey one, hasn't got his green rug on, so this time she recognises him as a horse and not a collection of fag packets or garden chairs, or whatever she imagined he was last time they met.

She isn't bothered by going down the middle of Orton village between all the parked cars. She isn't very bothered either by the Water Board men cleaning out drains at the junction opposite Hall Farm, until one of them retrieves a ten foot length of drainage rod, wipes it and throws it down beside its mates with a noise like a whipcrack. She jumps sideways about six feet. And the bloke shouts, "Hey - you've lost a shoe!" which is much more polite than what I am thinking!

Ruby isn't keen on standing still, but I tell her - fairly mildly - not to be such a fool. She takes her cue as much from the tone of my voice as anything else. The bloke retrieves her boot and trots obligingly after us, off the main road. He tosses it (he obviously has a habit of throwing stuff) and it misses the carriage and lands between Ruby's feet. I move her on a few yards so he can pick it up, and this time he manages to deposit it on the floor. "I'm not used to horses," he says. I say, "Not to worry," and thank him, and we walk along the lane past the school, then I stop in the Methodist chapel car park where I tie Ruby to the fence, and while she reaches over for grass, I reinstate the boot.

It goes all right after that, for a while. I meet a friend and have a chat, and Ruby is perfectly happy to wait for us. Then we set off to trot home.

Back past the eventers and the stands of marsh orchids. Suddenly there's a rhythmic clanking and I see that the yachting quick-release shackle on the end of one of the traces has quick released itself and the trace is swinging free. This doesn't seem to worry Ruby, but it worries me. I suspect the wind blew Ruby's long tail onto the webbing pull-tab and that was enough to flip the shackle open. Fortunately the trace-carrier loop does its job so the trace isn't tangling round her feet. We pull up and turn onto the grass verge, where with moderate swearing I re-fasten the shackle, and off we go again.

Ruby's got into her stride by now and as we trot down into Greenholme I can feel her bunching herself to canter up the brow to the farm.

And the bloody boot flies off again.

This time I say, "Sod it!" and let her canter on home. Unyoke, unharness, give her a small feed and leave her munching, still with three boots on, while I whizz back in the car to pick up the boot, before anyone can run over it and wreck it.

When I'm taking off Ruby's remaining boots it occurs to me to try the much-too-keen-to-fly hind boot (the Glove) on her front hoof, for which it used to be too small. And it fits. So now I am wondering - have all her hooves got smaller over the time she's been working unshod? That seems very strange, but it's possible. Or maybe the boots ease a bit with use? Measuring and re-fitting will have to be done before I can be sure. I may have to get a smaller pair of Gloves for her hind feet and move the current ones to her front feet.

I turn Ruby out into the paddock, which is what she's really been wanting since before we went for our drive. 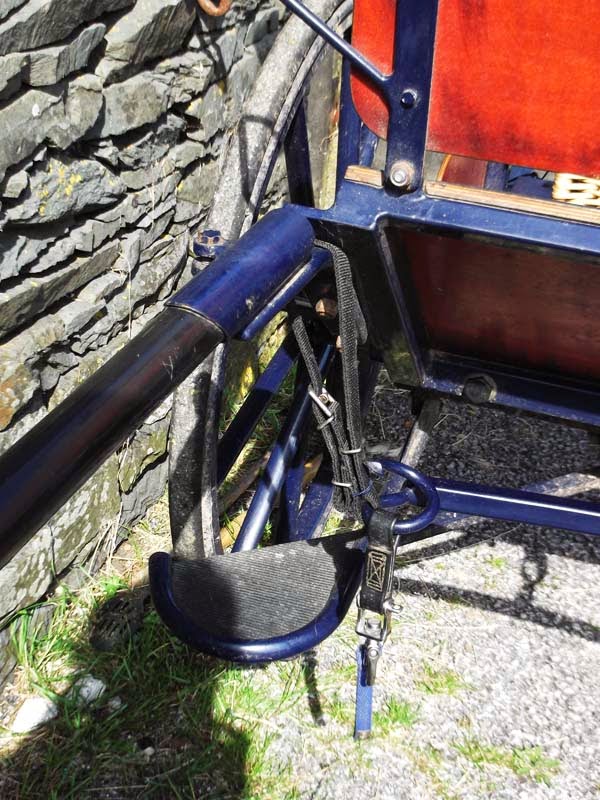 Last of all, I dismantle both the quick-release shackles, take out the helical retaining springs, decompress them quite a lot, and re-fit them. It will take a much stronger pull to flip them open now, and if necessary I will shorten the pull tabs, or do without them altogether.

So, although things went wrong, we coped. And that's the main thing.

I conclude, though, that I must be in a time warp, because this is the kind of day that usually happens to me when we go back into work after winter. I can only assume it's very mild for January.

PS - I happen to have Ruby's foot measurements from 2007 which was when we went barefoot/booted. While assessing the actual figures is a bit mind boggling, charting them makes it very clear that her hooves have got BIGGER over the intervening years. The lines indicating length and width for each newly trimmed hoof make a significant upward leap from 2007 to this year's measurements.

Therefore - it's imperative that I clean the boots and her hooves of the oil I use to protect feather! I must away to the shops for some cheapo toothpaste!

Sue's books can be found at her web site, Jackdaw E Books, http://www.jackdawebooks.co.uk/
Posted by Sue Millard at 4:30 PM