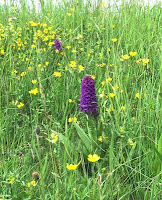 When I went shopping in the middle of the week,  instead of flitting up the M6 I took the scenic route from Greenholme to Shap. And, luckily, I had the little Fuji camera in my handbag, because the grass verges beside the motorway bridges were a gleaming tapestry of purple and gold. Positively Assyrian.

If you've ever thought that "anything that isn't growing in a tub or a garden bed, and anything other than clipped grass in the lawn, is a weed" then you should have another look at the wonders of Britain's grassland.

I parked the car and I swear I didn't walk more than 100 yards from it but I found over 3 dozen flowering plants:

And that's just the things that were flowering. July will bring us the lavender and white heath orchids and the foamy cream of meadowsweet; thistles of the creeping, musk, marsh, spear and melancholy species; and the bristly brown-and-purple shaving brushes of knapweed.

Green is also a colour

Don't forget the flowering grasses - they are nearly up into your face! 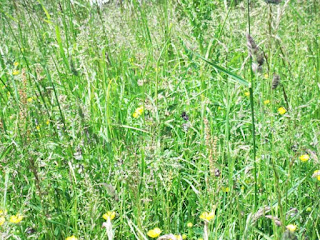 A little way along the verge from my house I also found the small Quaking grass, with pendulous flowers on stems like thin wire.

Even a thistle or a nettle has a use: sheep, cattle and horses eat the flowers of thistles (sometimes more), and the nettle has a history varying from cloth and rope to soup and beer, as well as being an ingredient in "dock pudding" and, of course, a feasting place for butterfly caterpillars.

One of the few benefits of Council budget cuts is that they don't send men round quite so often with mowing machines. Look at the glory they have left for us.
Posted by Sue Millard at 5:25 PM

Their names alone are poetrty. I especially love 'eyebright' and 'Queen Anne's lace'. All the fields around us are lit up with red clover, dandelions, and creeping buttercup. I battle those every day in my own garden, along with sticky willy, but I love them dearly in the meadows and verges.

'Poetry', damn it. Sticky willy is in my keyboard too, apparently.

I just did a clearout of the cow parsley from the garden (it's beginning to set seed now and I have enough of it!) - and the goosegrass (stickybuds or sticky willy). Ruby can hoover up sheaves of it over the next few days.