Here we go, folks, with the Heroes and Villains Bank Holiday Blog Hop!

This one, for me, isn't quite so historically oriented. I do write a lot of other things, after all. 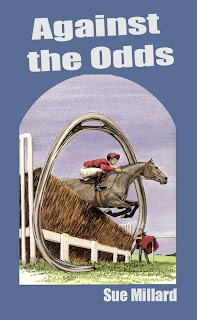 I will give away a digital copy of AGAINST THE ODDS to two people who enter, between the dates of 3 and 6 May (draw to take place on the 7th).

I will contact you if you win and ask for your email so I can send the book. Please let me know whether you'd like MOBI format (Kindle), EPUB (Kobo/Sony) or a PDF. All I ask in return is that when you've read the book you leave a comment on the Amazon UK web site (UK), or the Amazon USA site if that's your location.

PLEASE check out the other participating blogs (links at the bottom of this post) because ALL of them are giving away something!

I've read some authors who say their delight in villains is so great that they are the main motivation to write their books. I'm the opposite, I'm afraid! I have to start with a character I like, who becomes the heroine or hero.

A villain, or an antagonist, has to be introduced to give something for the main character to battle against, to create tension in the story. Of course that antagonist may not be an actual person. It may be pressure of work; the "horsemen" of famine, war, or disease; or even a political movement.

In COACHMAN, George's first difficulty is that like many men (my husband included) his work is very strongly to do with who he is. Driving a four in hand to a road coach is such a big part of his life in terms of his physical energy, his working day and his devotion to it, that he finds it quite hard to cope with demanding personal relationships as well. He's left his family home in Cheshire and shifted around, pursuing ever better positions. He's in a profession where girls admire him as a glorious hero passing by each day. If he wants to take advantage of them they give him every encouragement, so he doesn't really need to settle down.

One of the stage coaching men of the period remarked that a driving man was actually better off without a wife,  though he added that it might be all very well if he could have two, enabling the tea things to be set out ready when he came home at each end of the road!

When George does get involved with a girl, however, the innate decency and kindness in his character make him unwilling to leave Lucy behind when he moves to London. These characteristics meet an even bigger challenge in Sarah Chaplin. She is as strong a symbol of the business side of early Victorian life as he is, and far less vulnerable because she is already rich and not devoted to the horses that George loves. She's fully aware, indeed tormented by her physical needs, but she wants to retain her power in the family business and not have to hand it over as most rich girls did on marriage. She pursues George because he is there, a part of her father's business, a handsome young man with some status on account of his skills - and it's only because her father is a powerful businessman and her mother an experienced manager that Sarah can't go as far with him as she would like! It's when her father dismisses George in order to keep her away from him that she becomes really unpleasant, writing letters that become more and more demanding and unpleasant as her frustration increases.

In AGAINST THE ODDS, there's plenty of tension in just getting horses fit to compete in National Hunt races. There's friction between Sian and the other girls in the hostel at Green Bank, and between Sian and her abusive boyfriend Justin. When Sian escapes to work in another racing stable, she finds a better man to love; and then when she has recovered her confidence, she is responsible for thwarting one of Justin's criminal plans and helping her lover (and his horse) to succeed.

I had difficulty with finding the key to Justin as the villain of the piece, but eventually I decided he's selfish. What he wants is money and pleasure and he doesn't care if he hurts people in the process of getting them. He's trying to make a killing by race-fixing, betting against fancied horses and "nobbling" them before their races via bribery and threats to their handlers. He only stays in racing because that's the business he knows how to work for his own ends, and he's not going to stay in it for much longer.

I think after the end of the book he'll be heavily fined by a legal court and "warned-off" by the racing authorities. After that, he'll go into something flashy and non-horsy that has prospects for other criminal activity - like running a night club! And he just might pop up again as a minor character in a sequel... I haven't yet made up my mind.

Good-looking and ambitious George Davenport travels to London with his bride Lucy, determined to make the most of his skill in driving a four-in-hand of horses. It’s 1838. Queen Victoria is crowned, and England is at peace, but it isn't a good time to be a coachman.

As George finds employment with William Chaplin, the “Napoleon of coaching”, the first railways are about to open across the country. Their competition will kill off the road-coaching trade. George loves both his work and his wife, so he has a lot to come to terms with… even before the boss’s daughter starts to stalk him.

Please visit - there are goodies available on all links!

Interesting analysis of your characters. I came here to enter your contest for a free copy but I may now have to buy one right away!

Interesting analysis of your characters. I came here to enter your contest for a free copy but I may now have to buy one right away!

Good post. Yes, I suppose coachmen would have had the romantic attraction that railway men and airline pilots have for their own eras. It's good that George still has a moral centre.