You have had an interesting career prior to setting fingers to keyboard to produce your historical novels Of Honest Fame and May 1812 . Would you like to share some of it with us? 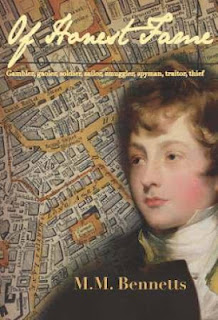 I think my life possibly follows the course set out by poet Theodore Roethke when he wrote, "I learn by going where I have to go..." I had always assumed I would be a concert pianist--it's what I'd been training for since childhood, when I wasn't reading. And possibly that last bit is the important bit, because when I went on to the University of St Andrews to pursue my masters work, I decided not to live in town or in the halls of residence, but found myself a tied workers' cottage on a nearby estate to renovate and live in.

And I think it may have been the combination of living in this ancient place--the big house had been the Archibishop of St. Andrews' residence before the Covenanters ended that (about 500 feet from my front door--and no, I never saw the ghost carriage) and it subsequently was remodeled by Robert Adam--and studying there, spending my spare time reading on the little stool at the local bookstore where I discovered Dorothy Dunnett's work, that I strayed from my musical intentions into an immersion in the past that just grows ever deeper.

So then, a few years later, there I was not knowing what to do with myself, and a chap I knew encouraged me to go in and talk to the book editor of this major newspaper because as he put it I'd read everything, I read faster than anyone could contemplate and the money was okay. So I did.

And he was rude to me. So I was rude back. Which showed him, I guess, that I was no one's patsy and so he took me on. And to my shock, he published my work all the time, preferring me it would seem to many others who might have had seniority, but in my favour I always wrote exactly to the wordcount he required, I didn't fuss over what he gave me to review, and I never missed a deadline. Plus, I saved his bacon on a number of occasions when someone else had let him down and he'd ring and say could I file by the next morning and I always said, "Yes."

Later I was a French translator for a bit, specialising in Francophone West Africa...

But all the time, I was always reading about some facet of the early 19th century, so eventually all the ideas and research melded together, the stories unfolded and the end result was the books.

What triggered you to begin writing?


Well, to be quite honest, it was a writing assignment when I was about 13. I didn't do work voluntarily, you understand. Not ever.

Later, at St Andrews, that's when I started thinking out my own stories as I sat by the fire in my little stone cottage...It was perishing cold, I was on my own and procrastinating, of course, and NOT reading my tomes on Quattrocento art and architecture...I lived in this rural heaven and I loved everything about it...in fact, I wrote about the place when I described the front drive of the house I called "Britwell Park" in the novel, May 1812.

What fascinates you about economic and military history of this period? 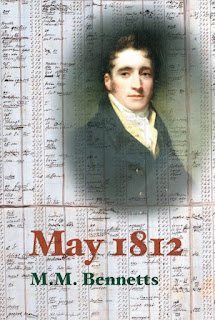 I've always been drawn to periods of upheaval and change and progress. It's why I was specialising in the Italian Renaissance to begin with. Because there's this electrifying vibrancy, this excitement, this willingness to experiment, this challenge to the old ways of thinking and doing.

And the early 19th century is another of these eras of change and challenge.

In literature, you've got all of these different forms of the novel taking shape. There's Austen pioneering the domestic novel, while in Scotland you've to Scott writing historical fiction, and the poetry is just tremendous too; you've got Beethoven changing the face of the orchestra as well as stretching the limits of sound and expression for the fortepiano of the time. You've got this collection of amateurs running Great Britain as she stands alone against the greatest and most successful military empire the world had ever seen, standing alone against France's might, and here's the shocker--they win! They've all had to learn to think in a new way, they've thrown the might and ingenuity of the industrial revolution into their weapons and their technological advances, they're all flying by the seat of their pants, and they win! And I just admire them all so very, very much. I admire their daring, their courage, their intelligence, their drive, their tenacity...

How much of your previous career training do you find carrying over into your writing? I’m thinking of techniques, approaches, discipline.


Well, for a start, I'm very susceptible to music. You have only to play a bit of Beethoven or Schubert and I'm in a 19th century place in my head. Which is a help, I fancy.

The self-disciplined hard work though, that's what is the most important. As a pianist and particularly as an accompanist, one practices a great deal every day. And one learns very early on to practice the same bit of music over and over again so that it's not just perfect but so that there's this rising standard of perfection, so that no matter how difficult it may be, eventually it's executed with ease and even brilliance. Those long runny bits that Chopin was so fond of writing, one practices those until they roll off the fingers, until they sound like running water--easy, effervescent, delicious. It doesn't matter how long it takes as long as it's right in the performance. And that's how I write too.

But also, there's the rhythm of music which finds its way into my prose--and I'm very aware as I write of the rhythm and cadences of the language, the metre (I'm quite fond of iambics), language isn't just a means of transmitting an idea on the page, it has a sound, a sensation in the mouth even, and it evokes visceral reactions, and I like to use to the music of language as much as I can.

What advice would you give to an aspiring historical novelist?


I don't know that I have any. I think for historical fiction to be successful it's important to listen to "their" voices, no matter what era one is writing about, not to carry forward one's own prejudices and/or views, but to reflect their concept of their world and themselves as much as possible, rather using the history as a vehicle for one's own views...
And the old chestnut: What are you working on now?

Well, surprisingly two things. One, a collection of sonnets.

Two, I'd love to say it's the next book, but it's probably the next two books. If I may explain?

The only problem with that was I didn't know nearly enough about the 1813-14 phase of the Napoleonic conflict in Germany to write with any credibility whatsoever. I'm a bit picky--I like to know things like what the weather was doing every day, and what the interiors of the peasants' houses were like, and all sorts of bizarre details like that, so it's taken longer than I would have liked to get all this under my belt...So now I'm writing the next book, which is called Or Fear of Peace.

Though in my head, I'm also working out the details of the plot for the next book, since I don't reckon I can squeeze in all the war and the Congress of Vienna too, not if I wish to write a book that people can actually lift...

And may I just say, thank you so much for this interview and asking me such thoughtful questions. It's been such a pleasure...

I am looking forward to reading your historical novels. I'm inspired by music, too, although listen and do not play and go write a bunch. I enjoyed your post.